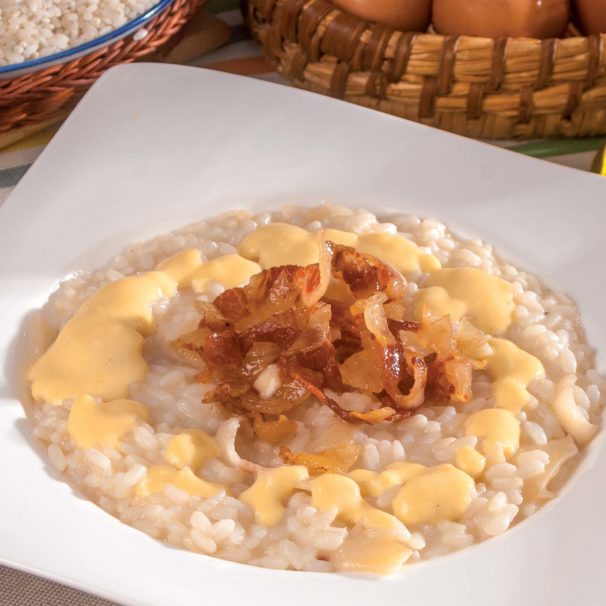 1.We slice the bacon and cut it in strips. let’s use one half in a pot and let it dissolve a little. When he has released a little of its fat, add the rice and tostiamolo.

2. Let’s add a leaf of laurel. When the rice starts to “sing”, we bathe with the broth and go up. We bring to cooking, stirring occasionally a lot and adding, when necessary, other broth.

3. Meanwhile, brown the other half the pillow in one dry pan, without adding other fats, and cook it until when he has not become beautiful Crisp.

4. In a bain-marie bowl, we put the yolks and the egg whole. We add the wine, two ladles of broth, a pinch of salt and a little ground pepper at the moment.

5. Using a whisk, we mount energetically the eggs. We keep going until we get a clear and creamy compound, practically an eggnog but not sweet.

6. A cooking finished, remove the risotto from the fire and leave it rest a few minutes. So let’s keep it with the bacon fat passed in pan and grated pecorino.

7. We serve the risotto. With the palm of the hand, let’s a few taps at the base of the plate, to distribute the content well. We add the bacon crispy, the eggnog and we serve.