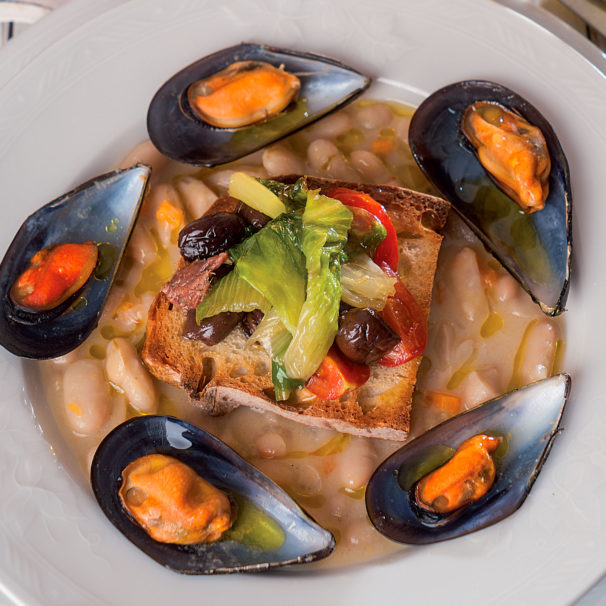 1. Fill a bowl of lukewarm water and melt a pinch of salt. Let’s dip the beans and let them rehydrate for about an hour. The Risina di Spello variety does not require a long soak.

2. Let the beans and transfer them to a pot with clean water. Add half onion, sliced ​​celery and carrot and cook them for about 20 minutes. At the end of cooking, adjust the flavor and let them rest in the cooking liquid.

3. Carefully clean the mussels. By the way, we buy those packed in the bag, provided with a label. We will eliminate the fine linen just before cooking them. Meanwhile, heat a pan with a drizzle of oil and crushed garlic.

4. Coarsely cut the escarole and sauté it in a pan. We combine the mussels and pepper. We cover with a lid and cook over high heat. That of escarole is my idea. Chicory is usually used.

5. In the meantime, the mussels hatch, slice the lard and melt it in another pan with a drop of oil, a sprig of rosemary, a bay leaf and the remaining spring onion, cut into thin slices.

6. As soon as the lard is completely dissolved, we add the beans, with a little of their water, just to avoid that everything is too dry. Let them flavor on the fire for a few minutes, stirring gently.

7. As soon as the mussels have opened, we take a few molluscs and mix them with their water, with a small part of the beans. Then pour the cream obtained in the pan with the beans and let’s thicken it.

8. Place the slices of bread on a baking sheet and grease them with a drizzle of oil. Season them with escarole, desalted anchovy, olives, chilli and cherry tomatoes. Bake them for 8 minutes at 180 degrees, so excess moisture will dry out.

9. We serve the beans surrounded by open mussels. We season with a drizzle of oil and complete by placing the bruschetta in the center, whole or cut into slices or cubes, according to taste.

9. We serve the beans surrounded by open mussels. We season with a drizzle of oil and complete by placing the bruschetta in the center, whole or cut into slices or cubes, according to taste.