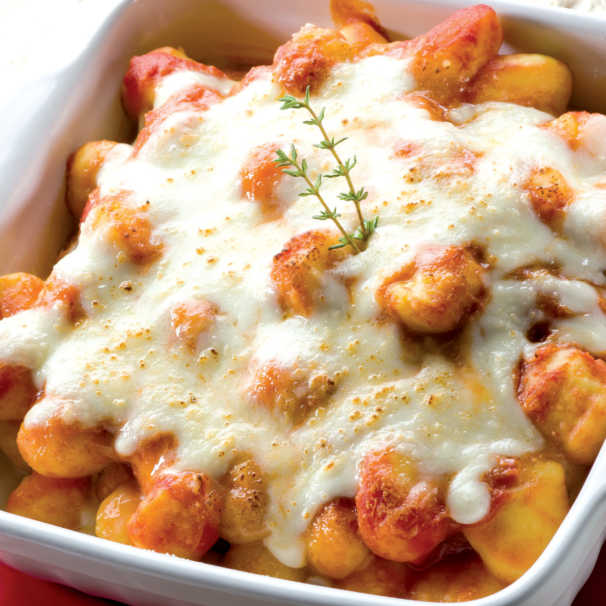 1. We cut the tomatoes with a cross cut, blanch them quickly so let’s cool them down, putting them in a container with water and ice. After that peel them, strip them of the seeds and cut them into small cubes.

2. In a saucepan, bring to a boil the water with a drop of oil and salt, then add sprinkle the already sifted flour. We keep the mixture on the flame, mixing it up to make it homogeneous. When we notice that comes off the walls of the pot, we turn off.

3. We transfer the mixture to pastry board, we add a little bit of flour and let’s start working it With the hands. We train a ball, then cut it into pieces and let it cool.

4. In a pan with oil, let’s do fry the onion chopped, then add the diced tomatoes and basil. Let’s go and, just before to turn off, flavor with one dusting of grated parmesan e mix.

5. Let’s drain it well mozzarella, so that I remove milk, then cut it to pieces and add two thirds to the sauce, out of the fire. The the rest we will use it to cook au gratin the gnocchi. We also add other chopped basil.

6. We roll out the pieces of dough, now cold, with sausages, then cut them into chunks, thus obtaining the dumplings. Let’s put to cook in a pot with salted boiling water.

7. When the gnocchi are cooked, let’s drain them and transfer them in the saucepan with the sauce, we combine another dusting of grain, then quickly mix the all to flavor.

8. We transfer the dumplings into containers of terracotta, we add some pieces on the surface of mozzarella and the rest of the grain and put in the oven to cook au gratin for two minutes. Once you do surface crust is formed, we are ready to serve.