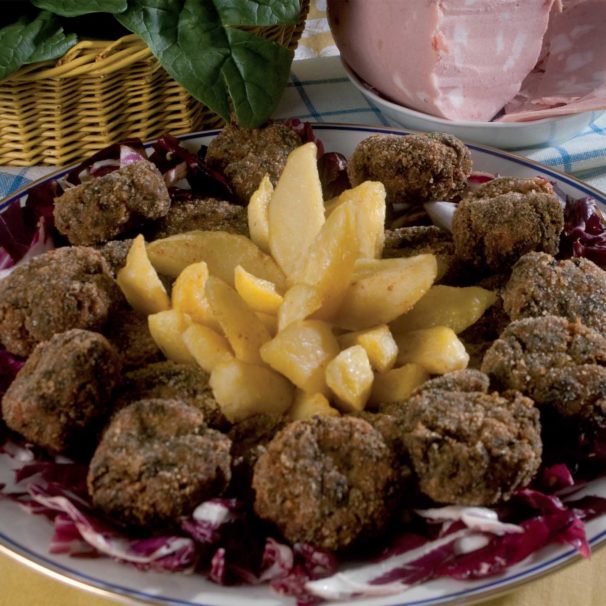 1. We clean and wash the spinach, scaldiamoli in boiling water, salt. Drain them, squeeze them well and mince them very finely. Aside, let’s prepare a mince of garlic and parsley, will serve for the dough of the meatballs.

2. Cut the boiled meat into pieces meat and let’s grind it in the robot for cooking together with mortadella. We combine the spinach, then the beaten parsley and garlic. We set of salt and pepper and season with nutmeg.

3. We add a whole egg, a yolk, half grated parmesan and mix. If the dough should be too soft, add a handful of breadcrumbs. We perfume with a little of grated lemon zest.

4. We make meatballs with the freshly prepared dough, crushing them a little between hands. We beat the remaining egg white, pass the meatballs and then bread them in the mixed breadcrumbs with grated parmesan.

5. Peel the potatoes, cut them into large wedges and parboil them. So let’s fry them in plenty hot seed oil, with a sprig of rosemary and two poached garlic cloves, which we will remove halfway through cooking.

6. We flavor the potatoes with a some salt and cook them up when they turn golden. We mix occasionally. Let’s drain them on from the oil and drain it up straw paper. If necessary, we add other salt.

7. We prepare a radicchio salad and season it with salt and extra virgin olive oil. We fry the meatballs and drain them on straw paper. Serve them with french fries and the radicchio salad.